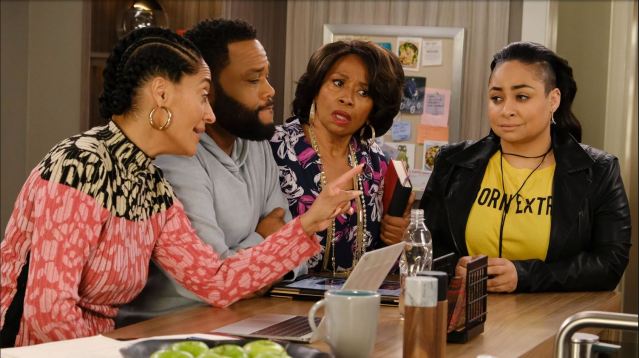 Episode: Good in the ‘Hood

When it premiered in 2014, Black-ish was a breath of fresh air. Five seasons later it continues to be one of the most socially important sitcoms on television. What separates Black-ish from other shows isn’t just the fact that it consists of a black family, but the fact that it consists of a black family that frequently discusses issues relevant to black Americans across the country. It’s a bold show with creators, cast, and crew unafraid to tell stories that are seldom told, may be controversial, but ultimately shed light on very real issues relevant to black people, thus educating the country at large. Here’s a list of six topics Black-ish hasn’t shied away from.

Being black in the workplace

Being black can be, and often is, an isolating experience. Particularly existing as a flake of pepper in what feels like a sea of salt. Black-ish tackles this subject across settings often, but one of the most pointed moments of doing so is in the Pilot. During the episode, we’re introduced to Andre Johnson (Anthony Anderson), an advertising exec who desires a promotion to be the first black senior vice president of the Stevens & Lido firm. Dre receives the promotion he desires to become SVP…of the Urban Division. Dre instantly cringes away from the position, fearing he was only chosen to head the department because of his race. Dre eventually accepts the promotion with pride as a means to drive his career forward and better provide for his family after consulting with his wife, Rainbow Johnson (Tracee Ellis Ross), who informs him that she deals with the same issues at work for being a black female doctor. Bow’s perspective offers a bit of intersectional interjection into the episode.

Jack & Diane participate in a school play featuring Jack as Christopher Columbus in season four’s Juneteenth. Dre is understandably appalled at the fact that Columbus is still celebrated due to the fact that Christopher Columbus did not “discover” America as the day celebrates, but rather got lost, misidentified Native peoples as Indians because he thought he was in India, then killed them. Not to mention the fact that many Native peoples do not celebrate Columbus and understandably think of him as evil. “I can’t believe you would honor a slave trader, like Columbus, when you do not honor Juneteenth,” Dre said, scolding school personnel. Junior confirmed that the family does not celebrate Juneteenth, but the quote remains poignant, especially since Juneteenth is not a federally celebrated holiday.  The episode features rare animation in the series, as well as the musical styling of Aloe Blacc.

In Black Santa/White Christmas, Dre is struck with inspiration to portray black Santa at work when the company’s standing Santa Claus, Fred Garner, dies. Dre highlights that it’s still so taboo for Santa Claus to be portrayed as any race other than white. Instead, Angelica Rodriguez (Ana Ortiz) is selected to be the company’s Santa Claus. “Too far from the box. Get closer, closer to the box,” Dre internally panics. Dre swindles Santa from Angelica, who pulls a twist at the end that leaves Dre holding an empty bag in the presence of disappointed children expecting presents. The episode ends with Dre’s realization, with more assistance from Bow, that Santa Claus can be any race or gender.

The audience is introduced to Dre’s sister, Rhonda (Raven Symoné ), in season one, episode 22: Please Don’t Ask, Please Don’t Tell. Immediately the episode begins with Dre’s voiceover, “Another thing black people don’t like to talk about is the gay people in our family.” The statement is an oversimplification of homophobia and race, but it opens the episode for heavy conversations. Dre and Ruby spend the episode playing linguistic gymnastics by referring to Rhonda’s girlfriend, Sharon, as her friend and/or roommate. Rhonda reappears in Johnson & Johnson to marry Sharon in an episode where Dre’s homophobia continues to be addressed and chipped away. Rhonda makes an appearance at least once a season, most recently in Good in the ‘Hood where she confirms Dre’s fear of visiting supposedly low-income, predominantly black neighborhoods.

Being a family that happens to be black

Black-ish strength lies in its ability to balance the intrinsic effect race and systems of oppression have on black people with its portrayal of the Johnson family as a familial unit with problems common to many other similarly structured two-parent, middle classes families. In season one’s The Talk, Dre agonizes over how to talk to Junior about sex after learning Bow’s already talked to him about it. Bow and Dre struggle to ingratiate their alma maters to Zoey and Junior in Charlie in Charge and Black Math. The difficulty that may come with being best friends with your spouse is explored in Plus Two Isn’t a Thing. Bow & Dre navigate continued arguing and a brief separation across several episodes in Fifty-Three Percent, Blue Valentine, Collateral Damage, and Dream Home.

Black-ish was renewed for season 6, and will likely return in the fall! You can catch every episode on Hulu. Comment below with your favorite Black-ish quotes or episodes.