Over the weekend, President Trump casually alerted the nation via Twitter that for two weeks he will be delaying his previous order to spend Sunday morning raiding neighborhoods and homes of major cities with suspected migrants who are living in the U.S. illegally. He says democrats are to thank for the delay, but if they cannot come to an agreement with republicans regarding, “the Asylum and Loophole problems at the Southern Border,” deportations will begin.

On Friday, Nancy Pelosi, Democratic Speaker of the House, contacted Trump asking him to hold off on the order. Some cite this as the reason Trump called things off. This comes to the relief of millions of Americans nationwide. Frantic citizens were consoling each other with words of support as well as tips for evading ICE. Trump threatening the safety of immigrant people is not new. He practically ran his campaign on it.

Although many are relieved to hear the raids were postponed, Trump has come under scrutiny for pulling what some are calling a “bait and switch,” including Bill de Blasio, mayor of New York. The city was one of the listed places Trump would raid including Atlanta, Baltimore, Chicago, Denver, Houston, Los Angeles, Miami, New Orleans, and San Francisco. This tactic causes a lot of unnecessary fear and tension throughout the nation, leaving citizens in a constant state of reeling from one problem Trump creates to the next.

The threat of raids comes after Border Patrol increased Greyhound stops over the last month. Buses are being stopped so Border Patrol can interrogate bus riders about their citizenship. Some have called the tactic racist, citing that Border Patrol predominantly targets brown people to inquire about citizenship.

In a response to Trump’s postponement of raids, Pelosi tweeted, “Time is needed for comprehensive immigration reform.” Still, doubt lingers as to whether two weeks is enough time for bipartisanship. Republicans seek to limit asylum through legislation while democrats want to fund asylum options. Perhaps this is all gearing up for Trump’s re-election campaign? Only time will tell. Stay safe. 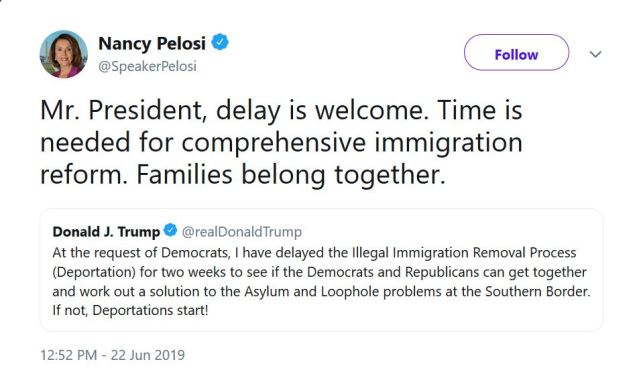