Juncture Magazine proudly stands with protesters protesting police murder across the country. To risk your health and safety during a pandemic to protest this country's history of anti-blackness is truly courageous. We are strong. We are together. #BlackLivesMatter #ALLBlackLivesMatter #TonyMcDade #BreonnaTaylor #GeorgeFloyd #PoliceBrutality #protest #justiceforgeorgefloyd #justiceforbreonnataylor #justicefortonymcdade #strongtogether
Alone together. While practicing social distancing, catch up on the Juncture Mag! Stay strong and continue to fight the good fight. ✊🏿✊🏽✊🏼 #socialactivism #covi̇d19 #advocacy #protests #boycott #socialdistancing2020 #socialmedia #womenofcolor #humanrightsactivist
Rosa Louise McCauley Parks, born February 4, 1913, was a civil rights activist most known for refusing to give up her bus seat when confronted by a white bus driver. Parks was also secretary of the Montgomery NAACP, fought for voter's rights, and participated in boycotts. The photo above is a mugshot from when Parks was arrested after refusing to give up her seat in what was already a segregated section designated for black people. Happy birthday, Rosa Parks. ✊🏾 #blackhistoryfacts #BlackHistoryMonth2020 #blackhistorymonth #bhm #rosaparks #segregation #blackwomeninhistory #blackwomen #blacklivesmatter✊🏾 #civilrightsactivist #civilrights #civilrightsmovement
James Mercer Langston Hughes was a poet/playwright/novelist/activist. Born February 1, 1902, Hughes grew up in Midwestern towns that helped shape his view of race relations. Posthumously, analysis of his work shows Langston wrote about sexuality quite a bit. Juncture kicks off Black History Month celebrating Langston Hughes! Subscribe to Juncture for free and enjoy our BHM series highlighting the histories of black womxn, queer black folx, and disabled black folx throughout black history! #BlackHistoryMonth2020 #BHM2020 #langstonhughes #qtpoc #queerwriters #disabledblackgirlmagic #blackwomeninhistory
Jalisa Luces-Mendes, creator and designer of Toni Marlow Co., spoke with Juncture Magazine about her flourishing clothing brand that creates apparel for trans and non-binary individuals to comfortably enjoy. In addition, Jalisa holds workshops grounded in true allyship, specifically trans-allyship. Tap the link in our bio to learn more about Toni Marlow and where to purchase apparel! #tonimarlow #tonimarlowclothing #queerfashion #representationmatters #transfashion #nonbinaryfashion #TOMboxers #qtpoc #fashionentrepreneur #womenentreprenuers #transpride #lgbtq🌈 #lgbtq2sx+ #lgbtq2sia #FeatureFriday
The life of Martin Luther King, Jr. is so much more than any one quote he uttered. Though his birthday was last week, today we celebrate his life and legacy nationwide. Many people and organizations who resisted King when he was alive now use sanitized King quotes of peace and unity. King strived for equality and the ability to stand comfortably side by side with someone of another race without threat of violence, as was rampant during segregation. However, King was willing to radicalize for the peaceful future he one day dreamed of. Many popular MLK quotes today are devoid of that fighting spirit. The second photo is a letter addressed to King, later confirmed to be from the FBI. The contents of the letter degrade King's name and chatacter. Finally, the letter, written as if from a black person who admires King, urged King to kill himself. King suspected from the beginning that the letter was from the FBI, then spearheaded by J. Edgar Hoover. History is nuanced, and Juncture would be remiss to ignore scholars and activists, mostly women, of the time who identified King as a strong and admirable leader for Civil Rights, but also a sexist. A long time colleague and feminist, Gwendolyn Simmons, championed King even as she acknowledged his sexism. Tune in to Juncture for a more nuanced take on Martin Luther King, Jr. dropping during Black History Month! #martinlutherkingjr #happymlkday #mlkjr #mlkjrday #civilrightsactivist #civilrightsmovement #ihaveadream #sexism #blackhistoryfacts #gwendolynsimmons
Poetry

Is the Pulse Still Beating? 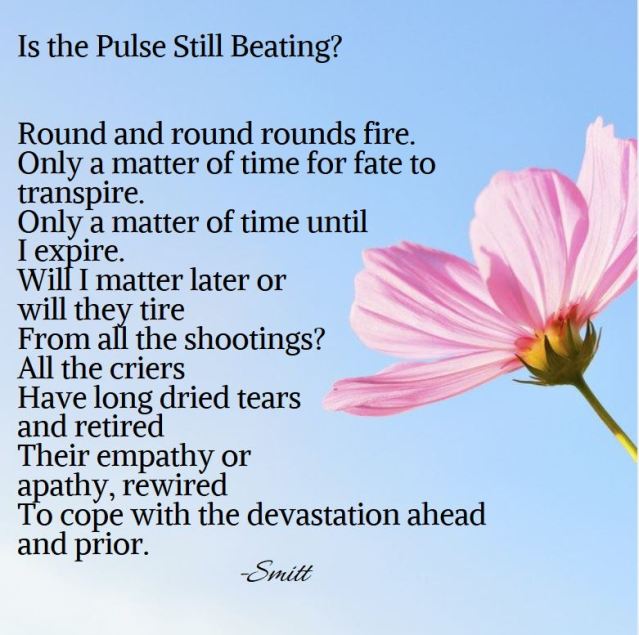